Private transfer to Reykjavik. Overnight stay in a superior hotel in Iceland’s capital.

Included choice of activities: Horseback riding or whale watching or Blue Lagoon or extra sightseeing, depending on arrival time or departure time.

Early morning departure from Reykjavík for the first 400 kilometres of our express tour around Iceland. The day is full of highlights as we travel the Golden Circle route and along the South Coast. The first 20-minute stop is at Þingvellir National Park, a UNESCO world heritage site. The Þingvellir plain is situated on a tectonic-plate boundary where North America and Europe are slowly tearing away from each other. As a result, the plain is scarred by dramatic fissures, ponds, and rivers, including the great rift Almannagjá. We continue for two more 20 minutes stops: first at Geysir geothermal springs with a variety of hot springs and bubbling pools. The original geyser is now dormant and has been replaced by Strokkur, “the Churn”, which erupts at 5-10 minute intervals. Nearby is Gullfoss, a double waterfall that tumbles 34 meters into the Hvítá river originating from the glacier Langjökull. Gullfoss is one of Iceland’s most famous nature sights. The next stop (10 minutes) is the high but narrow Seljalandsfoss waterfall which plunges 65 meters over the mountain. Say “been there, done that” at the thundering Skógafoss waterfall (10 minutes) which tumbles 62 meters over a rocky scarp, kicking up vast sheets of mist. The tour continues with another 20-minute photo extravaganza on the black lava beach of Reynisfjara, which is widely regarded as the most impressive black sand and pebble beach in Iceland and features an amazing cliff of regular basalt columns resembling a rocky step pyramid. The last stop of today is in Vík (20 minutes), Iceland’s southernmost town before we reach our first overnight accommodation near Kirkjubæjarklaustur at the Vatnajökull National Park area. Estimated arrival time is 20:00

The quick tour around Iceland continues. We spend the day exploring Europe’s second-largest national park and driving along beautiful fjords and past small fishing towns in East Iceland. Today’s mileage is about 400 kilometres. We start with picture time at Svínafellsjökull glacier tongue (20 minutes), followed by a 90-minute stop to explore Jökulsárlón glacier lagoon by an amphibian boat among floating icebergs, one of the most beautiful and dramatic spots in the whole of Iceland. Huge pieces of ice calve from the glacier and end up floating in the lagoon and out to sea. Many of you might recognize the glacier and ice lake from films such as Lara Croft: Tomb Raider and James Bond: Die Another Day! We also take a walk alongside the lagoon and on the black sandy shores, the so-called Diamond Beach, looking for seals, and sometimes there are stranded icebergs too. After a one-hour lunch break in the town of Höfn, we continue east with a stop in the charming village of Djúpivogur (20 minutes). Twisty roads take us along the dramatic fjord landscape and through tiny fishing villages in the East Fjords. Estimated arrival time at our overnight location in Fáskrúðsfjörður is 19:00.

Today, we travel 400 kilometres to our overnight location in Húsavík, North Iceland. From Fáskrúðsfjörður we drive along scenic roads to Egilsstaðir in East Iceland where we stop for 10 minutes. From there we travel north through the uninhabited highlands to Dettifoss, Europe’s most powerful waterfall, located in the northern part of Vatnajökull National Park. The round-trip walk takes about 40-60 minutes. Your next stop is Námaskarð, where we explore hot springs, fumaroles and bubbling mud pools (20 minutes). After a lunch break, we reach Lake Mývatn, known for its abundant bird life and amazing volcanic lava landscapes. First, we visit the pseudo craters at Skútustaðir (20 minutes), followed by a short walk in the mysterious lava fields of Dimmuborgir (30 minutes). We soak off our sightseeing and hiking in the geothermal Nature Baths at Lake Mývatn (1 hour). Estimated arrival time at our overnight location in Húsavík is 19:00. If you still have the energy, you might like to join an optional whale watching tour which starts at 20:00 (only between June 1 to August 10).

Early morning departure from Húsavík in North Iceland for the final 500 kilometres of our express tour around Iceland. We start with Goðafoss, the waterfall of the Gods, which is a beautiful sight to capture a couple of great moments on camera (10 minutes). You have one hour to explore Akureyri, the capital of North Iceland. This town with about 17.000 inhabitants nestles at the head of Eyjafjörður, Iceland’s longest fjord, at the base of snow-capped peaks. You might like to visit the botanical garden, walk up the stairs to the church, one of the landmarks of Akureyri or simply stroll along the pedestrian street with interesting shops and cafés. We travel south toward Reykjavík and stop for a hike on Grábrók volcano crater (40 minutes), formed about 3400 years ago. For anyone interested in geology, this is a “must-see”. The crater is in the middle of a vast lava field and from the top, you have superb views of the beautiful landscape. The final stop is Borgarnes (10 minutes), a small town of fewer than 2000 people, located in West Iceland. The view over the fjord and its mountains are highly scenic. Estimated arrival time in Reykjavík is 19:30. 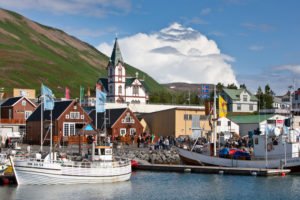 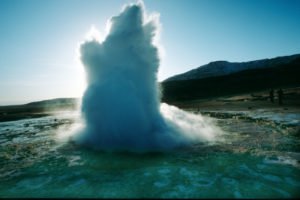 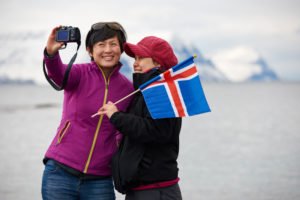 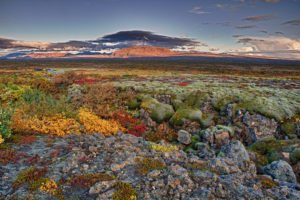 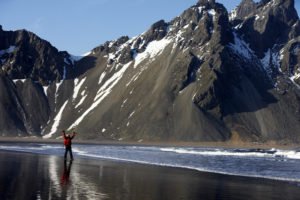 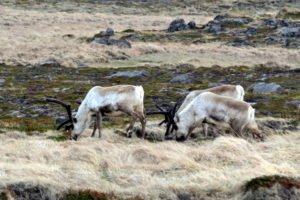 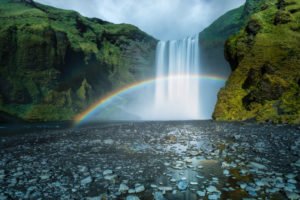